Last year, in an effort to improve the capability of our forums, we switched to new software. We expected tremendous scalability and rapid customization that would significantly improve each Member's experience across multiple devices and integrate flawlessly with social media platforms.

Unfortunately, after a significant capital expense, we have decided that the length of time and the additional cost to reach our goals make this enterprise untenable.

Thus, we have made the difficult decision to transition the forums to our original software platform. We’re excited that, in the nearly two years since we began the process of our most recent switch, our original platform has been upgraded significantly, and we are confident that the reversion will not only provide the stability that we desperately needed prior to our last move but will also return to the Membership the high level of customization that made our online community so great. We have also added technical resources to the GolfWRX staff that will allow us to build custom modules and modifications that we are confident will take the forums to the next level.

We remain the world's largest online golf community, and we still hold true to our core values and mission statement as written in 2005. Bearing both of those elements in mind, being the best and offering our Members a platform that is world-class are both requirements, not options, and it is that spirit that has motivated this decision.

So, please pardon our mess over the next five days or so while we transition the forums.

A few important notes: Current content will be accessible during that time, but the forums will be READ ONLY, and you will not be able to start new threads or reply to posts. Personal Messaging is enabled but PMs sent/received from the time the board was frozen will not carry over. We know this is inconvenient, and we apologize, and we greatly appreciate GolfWRXers bearing with us through the transition.

We are very excited about starting this next chapter for GolfWRX and getting back to the high-quality Member experience we all expect as soon as possible.

I was curious.. Tiger vs Morikawa Stats 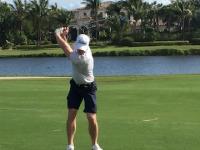 Firstly, this post is not meant to spark debate on whether Collin Morikawa is the next Tiger Woods - they’re clearly two very different types of players. However, in the 24 events Morikawa has played as a professional, his stats and recent accomplishments are certainly Tiger-esque.

What you maybe didn’t know was that in 2016 Morikawa played in the Air Capital Classic, a Web.com tour event, as a 19-year-old amateur who just finished his freshman year at Cal. He shot 63-63 over the weekend to earn a spot in a 3-man playoff where he eventually finished second to Ollie Schneiderjans. This guy has been championship-ready for years.

Here’s a side by side comparison of Tiger and Morikawa through the first 24 events of their careers after turning professional: 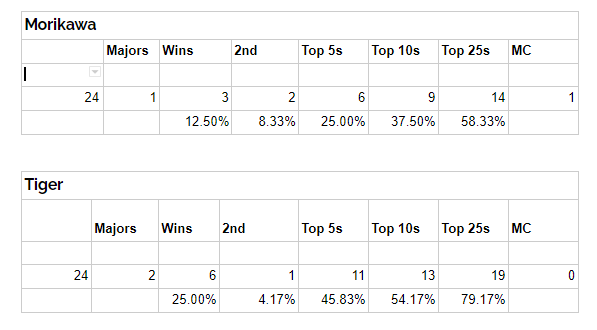 Tiger’s first few seasons on tour will very likely never be matched, however, I was impressed by how close their records are. I can’t think of a better start to a career in modern golf than Morikawa’s. He certainly won’t be the long-hitting phenom who destroys fields like Tiger did, but he might be the silent assassin who racks up his fair share of wins and major championships with incredible accuracy and consistency. Time will tell!

It looks like you're new here. If you want to get involved, click one of these buttons!